I have a rather wide range of research interests. I have been working in the philosophy of physics since my dissertation, in particular on Bell-type theorems and locality.  I have also worked on scientific models and the semantic view.  I have recently developed an interest in the philosophy of ecology, in particular on ecological modeling.  Even more recently, I have developed a strong interest in issues surrounding the relationships between science and values.

The research project that is the dearest to my heart (brain) at this moment is the articulation and application of a novel notion of understanding — modal understanding — which I hope can account for the cognitive value of science better than both realist and anti-realist accounts can.

Below is a list of my publications with abstracts and links.  You can find my current C.V. at the bottom of the page.

The main goal of this article is to give a systematic and coherent account of the intrinsic cognitive value of theoretical ecological models, which in turn explains their heuristic value. We will rely on the modal view of understanding to do so. The main claim of the article is that theoretical models provide high levels of modal understanding of both theory and phenomena. It will be explained how the mathematical, or formal character of these "physics-like" models contributes to modal understanding.

Following Jarrett, Shimony, Hellman etc., the mainstream interpretation of Bell-type theorems is that parameter independence (PI) is a locality condition while outcome independence (OI), is not.  A recent series of articles (e.g. Butterfield, 2007; Norsen, 2009; Norsen, 2011; Seevinck, 2010; Seevinck and Uffink, 2011) challenge this interpretation by reviving Bell’s analysis in terms of “local causality”.  We offer a de- fense of the mainstream interpretation.  It is argued that Bell’s “local causality” is an inadequate locality condition in the stochastic case, and an alternative condition is provided.  The analysis of Stochastic Einstein Locality offered in Butterfield (2007) is also critically assessed.  It is shown that the space-time version of PI is necessary, but not sufficient for locality. It is argued that a space-time version of OI is a version of the principle of common cause and not a locality condition.

Preprint   Link to the article

Elgin is known to defend the view that scientific models contain "felicitous falsehoods". Models that are known to be inaccurate representations of the world are cognitively valuable, according to Elgin. Many, including Elgin herself, have interpreted this claim as leaning towards some form of anti-realism. In this paper, I will argue that this is a wrong-headed interpretation of Elgin's work: "felicitous falsehoods" do play a role into the cognitive value of inaccurate models, but that role is of instrumental value. Elgin does not hold the view that falsehoods provide scientific understanding in and of themselves: only that they facilitate epistemic access to the fundamental, even if partial, truths that are contained within the models. While falsehoods may be "felicitous" is that they help the process of "exemplification", the cognitive value of inaccurate models ultimately relies on their partial accuracy.

A great deal of scientific activity consists in constructing, comparing, and testing theories and associated models (TAMs) that are known to misrepresent the way the world actually is.i It is non controversial among scientists and even philosophers of science that these TAMs have epistemic value. The epistemic value of TAMs roughly comes in three kinds:

First, notice that TAMs that misrepresent the world cannot be taken to provide explanations if one crucial characteristic of explanations is that the explanans statements be true, as it is the case in most accounts of explanation.ii Now, some of these TAMs have some predictive power, and that no doubt lends them some epistemic value. That said, most philosophers agree that this is not always the whole story, and for two main reasons. The first is that not all of the TAMs that are known to misrepresent the world are good at making predictions. The second is that most philosophers reject a purely instrumentalist view of science, and hope that TAMs that misrepresent the world can be conceived as affording some epistemic value beyond their mere predictive power.

Whether we are considering the extreme cases of TAMs that lack both explanatory and predictive power, or whether we are looking for some epistemic value “beyond” predictive or explanatory power, one option obviously remains open: TAMs that are known to misrepresent the world have heuristic power. They help scientists find theories and models that are either better at predicting, or better at explaining, or both.

One crucial question that arises at this point, but that has not been addressed in the literature, is: how do they do that? What is it about these TAMs that gives us the cognitive ability to move forward? What cognitive achievement do they foster that renders progress possible? Understanding. More precisely, I submit that TAMs that misrepresent the world afford a form of scientific understanding of their target phenomena. This form of scientific understanding is a cognitive achievement that lies at the core of the various degrees of heuristic power that TAMs that misrepresent the world can have.

The aim of this paper is to critically build on Justin Biddle and Anna Leuschner’s characterization (2015) of epistemologically detrimental dissent (EDD) in the context of science. We argue that the presence of non-epistemic agendas and severe non-epistemic consequences are neither necessary nor sufficient conditions for EDD to obtain. We clarify their role by arguing that they are contingent enabling factors, not stable difference-makers, in the production of EDD. We maintain that two stable difference-makers are core to the production of EDD: production of skewed science and effective public dissemination.

The aim of the paper is to show that understandability is not a basis for choosing between Bohm's theory and the Many-Worlds interpretation of standard quantum mechanics. Advocates on both sides assert that their preferred account is more understandable than the other. On that score, they are both right. The seeming inconsistency involved in this claim is dissolved when one realizes that they employ different notions of understandability. Moreover, understandability, on either notion, is not an overriding criterion of choice between competing accounts if our aim in developing physical theories is truth. 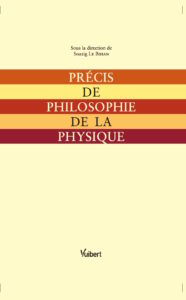 Among the issues exposed in the book are:

- on thermodynamics and statistical mechanics: Boltzmann's and Gibbs' approaches, reversibility;

- plus other issues in the philosophy of physics: computation, classification, symmetries etc.

This article deals with the interpretation of quantum correlations and Bell's theorem. It is a rigorous assessment of what can be said about the causal structure underlying Bell-type situation in the light of the current theories of causation (Salmon, Lewis, Woodward).

A critical review of Johansson's book.

This article expose the fundamental tenets of the semantic conception of scientific theories.

It so happens that classical physical theories can be interpreted as a representation of local interactions between systems with determinate properties. Orthodox quantum mechanics, which is one of our most experimentally well-confirmed theories, is notoriously resistant to being interpreted in terms of the above framework. Bell-type theorems and Bell-type experiments have made such an interpretation impossible. In the early sixties, John Bell demonstrated that any theory that represents its domain in terms of the above framework satisfies a set of inequalities, the so-called Bell inequalities. Experiments on quantum phenomena violate Bell-type inequalities. By a simple modus tollens, the upshot is that no theory that includes all the elements of the above framework can recover all statistical predictions of quantum mechanics. Philosophers have been trying to interpret this result, that is, to understand what the world might be like if it is true that physical interactions between systems are non-local, or that physical systems do not possess determinate properties. This line of thought found its climax in program of Òexperimental metaphysicsÓ that developed after the violation of Bell-type inequalities was observed. Experimental metaphysics consists in deriving metaphysical conclusions from the Bell-type experimental results. The mainstream interpretation within experimental metaphysics is that Bell-type experiments force us to accept the existence of a form of non-locality at the ontological level, but a form that we can consider benign because it is of a non-causal type. In my dissertation, I assess to what extent philosophical investigation can help us decide what the world is like on the basis of our best physical theories, from the point of view of the quantum domain and with an emphasis on Bell-type phenomena. My conclusions point to a more modest view on the possible achievements of philosophy of physics than the experimental metaphysics program would have us believe. In the first part of my dissertation, I investigate what role philosophy of physics can legitimately hope to play in the development and evaluation of various accounts of quantum phenomena. I claim that it is not the role of philosophy of physics to impose criteria of acceptability on physical theories, in addition to coherence and empirical adequacy. By contrast, I take in my dissertation that the legitimate role of philosophy of physics is to clearly determine what is imposed by the phenomena and our best theories from what is a matter of preference on the basis of the structural analysis of the phenomena and theories. In the second part of my dissertation, I turn to the more specific case of the interpretation of Bell-type theorems and Bell-type phenomena. I undertake a systematic examination of the mainstream interpretation. I show that the mainstream interpretation includes three claims, one about locality, another one about causation and a last one about holism. I utilize theories of locality and causation in order to assess these three claims. On the one hand, the upshot of my analysis is that the claim about locality can be supported by a rigorous theory of locality. On the other hand, no theory of probabilistic causation can support the claims of the mainstream interpretation about causation when it is construed as a strong program of experimental metaphysics yielding conclusions about the ontology of the world. That said, weakened versions of the mainstream interpretation, those that do without conclusions about the ontology of the world, can be made compatible with some theories of probabilistic causation. In particular, the mainstream interpretation can be rigorously supported if its claims are restricted to the empirical level.

Le Bihan, S. (2007), "What status should be given to the quantum description of the world?", in Rethinking the Comparative Evaluation of Scientific Theories, Stabilities, Ruptures, Incommensurabilities, ed. by L. Soler, H. Sankey, and P. Hoyningen-Huene, vol. 255, Boston Studies in the Philosophy of Science, Springer.

This is a critical comment I gave to Hervé Zwirn paper on the interpretation of quantum mechanics.

This is an article in which I expose the historical roots of the semantic view of scientific theories.